Somehow having the correct name for the symptom I experience most is comforting. Funny since it’s the most uncomfortable thing ever… but knowing I’m not alone in these strange sensations I have makes me feel a little more normal.

Aside from early childhood/babyhood, I have never been a napper.  Unless I was terribly ill, you wouldn’t find me sleeping mid-day on the couch or in bed.  I’ll stay up late and sleep in, that’s totally my style, but that seemed pretty normal to me.  I never did understand any adult who could nap at any time of the day.

When I was pregnant with Andy, during the first trimester especially, I do remember how tired I was and I am sure I took advantage of a nap or two… and I as I developed migraines, my medication did make it necessary to sleep off more than a few (during the day even *gasp*) so these still seemed to fall under the sick category of sleeping.

Now that fatigue rules my life on a sporadic basis it seems there are days that when Andy wants me to lay down with him for a nap, I will do so and be out for either an hour or longer than he sleeps.  Sometimes I nap instead of him.  Tonight, I had to apologize to him for sleeping through dinner time and feeding him so late.  He did come to me and tell me to stop sleeping and to go sit on the other couch.  He had had enough of me laying around and not acting like his normal mom.

The fun thing about RRMS is the fact that by definition, my MS symptoms will relapse and remit.  Apparently my symptoms vanished very, very subtly over time in such a way that I thought I just got used to the way I felt.  It wasn’t until I had a flare up last week (beginning 9/8/16 to document) that I realized that I wasn’t just used to how I felt as a new normal, but those symptoms actually did disappear.  The burning came back.  I have had to slow down, the fatigue is returning, along with some other less appealing symptoms.  My migraines and mood have also worsened.

Since nothing new has happened, and nothing more extreme than before has happened, it seems par for the course and I don’t see a big need to visit the doctor to alert him that I’m having a relapse.  Especially since this will likely last through the winter.

I’m a researcher, avid learner, Google fanatic.  When I was diagnosed with MS, I googled, I found Facebook groups and joined them by droves and absorbed all I could, because I didn’t have any idea what Multiple Sclerosis was, what it meant to have it, what I could expect.  The National Multiple Sclerosis Society is one of the most comprehensive resources out there and since I was diagnosed in May 2015, I learned that I had JUST missed the 2015 Walk MS event.  So, I made it a personal goal not to miss 2016, and to not only participate, but to lead a team.

I earned a fleece for being one of the first 100 team captains to raise $100 for Walk MS Seattle 2016. The fundraising efforts aren’t over yet, even though our walk took place on April 10, but our team has raised $1500.

I’ve learned a lot that I hope to improve on for next year for building my team earlier and for encouraging fundraising.  I was incredibly happy with all the support our team received and all the participation 🙂 I can’t wait for next year’s walk! 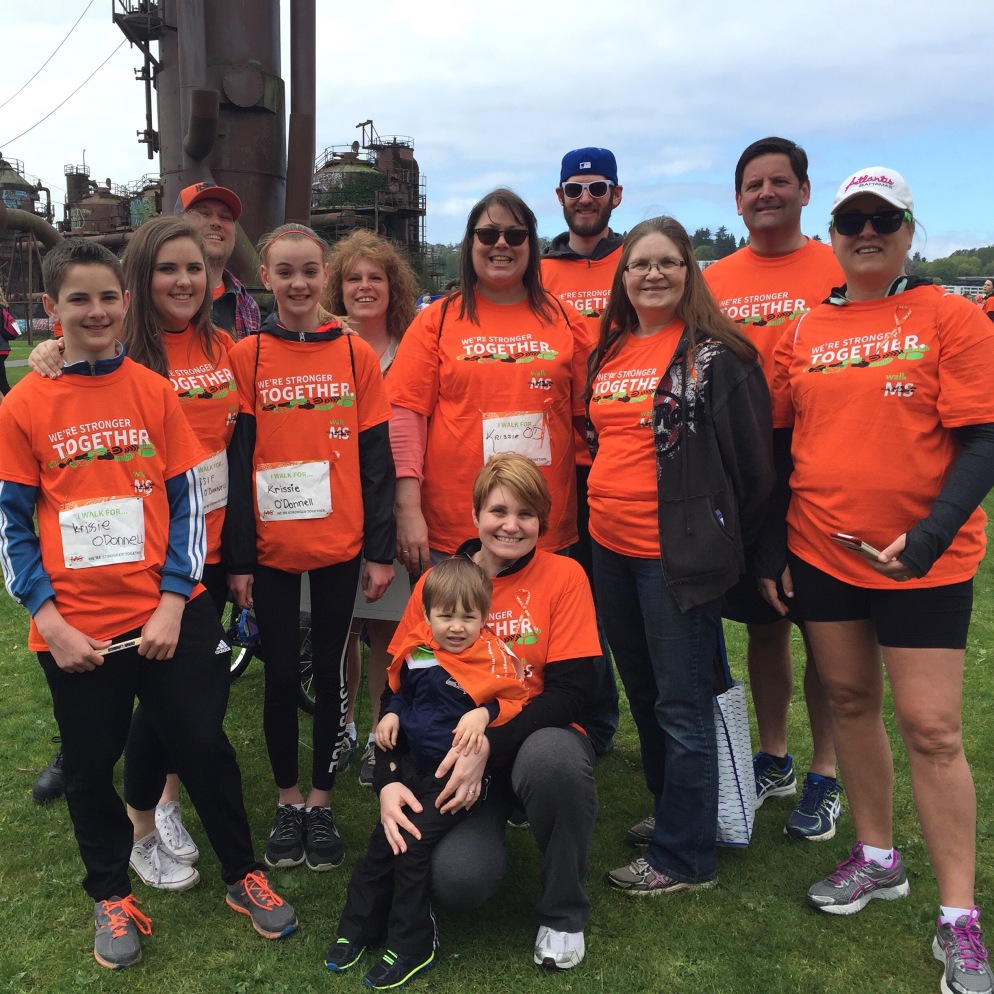 I began today feeling okay.  I have had headaches and migraines on and off that I’m blaming on hormones mostly.  Today I was greeted by some heavy smells of exhaust and rubbing alcohol like odors on my walk to work that triggered a migraine.  I took medication but though the pain of the headache has been taken care of, I have been dizzy and out of sorts. Anxious.

I had lunch plans that I almost cancelled because of the way I felt.  Instead, I walked the mile to Hard rock cafe (and back) to have lunch with a friend I haven’t seen in months.  I’m glad I did.  My body isn’t.  I had electric pulses in my hands and legs during both walks.  Sometimes annoying, sometimes painful.  The feeling in my hands is much like touching an electric fence.   The feeling in my leg surges through my leg.  Sometimes starting at my heel or ball of my foot or starting at my knee but surging in either direction with electricity.

I’ve had these feelings before.  Shortly after being diagnosed I experienced this in my arm and hand when I would bend my neck a certain way.  Its called Lhermitte’s sign. (https://en.wikipedia.org/wiki/Lhermitte’s_sign) It worries me a little because it may mean that I’m experiencing new cervical spine lesions.  I may also just be having a bad symptom day and overworking myself.  But it isn’t a good day in the MS roller coaster.

I have my next MRI of my brain and cervical spine on April 28.  Fingers crossed that nothing new shows up and my MS hasn’t progressed any.

Some days it’s harder than others to handle the Earth spinning.  I’m often rushing to take care of so many things at once that a lot gets left undone.  My sink is filled, my counters too.  But the dogs are fed, my toddler is happily chattering while watching Bubble Guppies on his iPad, I managed a simple dinner after a long day that I’m surprised I made it through.  I was in a meeting when I realized my laptop hadn’t charged and would die, and there were people arguing to my left.  I have a mild cold trying to creep in and my brain isn’t coping well.  I’m starting to tunnel and spin and my migraine that I’ve fought since Sunday is coming back.  Luckily, I’m soon saved by someone who notices how miserable I look and interrupts the meeting to ensure I need to be there.  Thank you kind soul!  I don’t and I gladly leave back into the fluorescence of my desk.  Escaping the cramped meeting room filled with conflict was all I needed to let myself feel better.  My headache went away and the spinning stopped.

This tells me that I’m still having anxiety problems, but hopefully I can work with them.  Though some days seem a lot worse than others.

It was a relatively questionable day for me to start with, as I’m still recovering from a few jam-packed Christmas celebration days.  I drove Andy north to grandma’s so that Kris and a could go to the Hard Rock holiday party.  I found out it started at 9, and that was minor red flag for this girl who fights to stay awake at that hour most nights.  The drive north is 1hr-15 at the fastest and I got to drive home with commuters, so by the time I got back home, I was ready for a nap.

Drinks before and then finally food so I could take my 5 pills.  I was already feeling a difference in how I was feeling at this party compared to the year before.  My anxiety levels are so much different and the loud music that vibrated through me caused a lot of sensory issues for me.  I tried to get comfortable, but as it got later, I was more and more of a flight risk.  We were supposed to give some friends a ride home, but it became more and more apparent that they would need to find another ride.

A very spunky girl tried to get me to dance with them, and I know that she just wanted me to loosen up and have fun. But what she didn’t know is how I was doing all that I could not to crawl into the fetal position and escape the speakers blasting the bass that vibrated through me.  I told her I wasn’t feeling well and that we were leaving soon. And after trying to have a conversation about the “cold that’s going around” she left me alone.  I don’t like being antisocial. I felt even worse having such a hard time just relaxing.

Happy New Year, from the 75-year old version of myself.

Numbness in Seattle
Blog at WordPress.com.